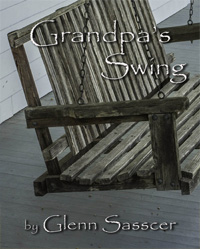 Grandpa's SwingFor a young boy, moving from the city to the farm was a huge transition made ever so more difficult when his Grandpa refused to allow the television to be brought into the house. His favorite past time was taken from him; what was he going to do? Die of boredom? Ah... a strange noise from the front porch answered his question and invited him on a journey. Would he accept? And, where would this journey take him? Only a ride on Grandpa's Swing can answer that question. Available on Amazon.